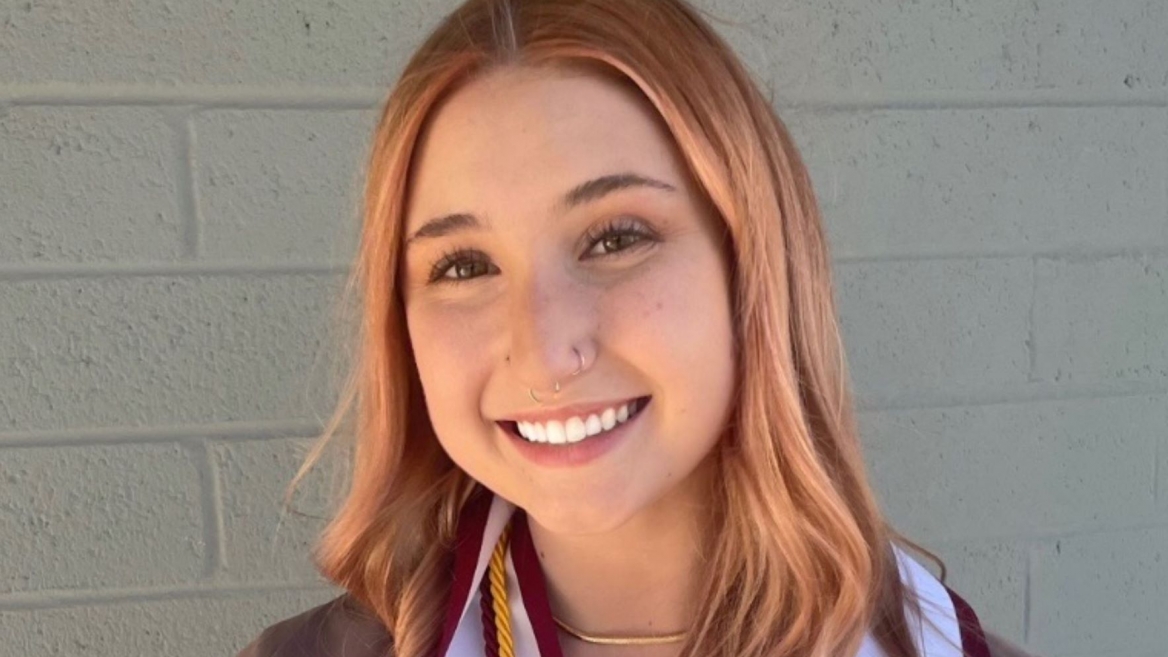 Editor's note: This story is part of a series of profiles of notable spring 2021 graduates.

Just two weeks before she moved into her freshman dorm at ASU, Carson Swisher surprised her mother with an announcement that would alter the course of her future: She was changing majors. She wanted to study criminal justice.

“Funny enough, I had originally applied to ASU as a kinesiology major. I wanted to become a chiropractor or physical therapist,” said Swisher, of Point Pleasant Borough, New Jersey. “My reasoning then was that I thought criminal justice was a field that was constantly evolving and applicable. With current events this is something that has shown true.”

Swisher, the spring 2021 Outstanding Graduate in the School of Criminology and Criminal Justice with a certificate in correctional studies, said that decision proved itself to be the right one during her second year at ASU.

“I began an internship as an AmeriCorps member in the Maricopa County Superior Court in downtown Phoenix,” she said. “Seeing what I was learning about in classes in real life and having the chance to fully engage with the community changed my perspective. I felt that I was no longer completing my degree for myself, but for those who I would eventually be responsible to help and advocate for. My ‘aha’ moment more or less came in the form of recognizing that significant social change comes from those in this field and I am grateful to be a part of it.”

Swisher, who is receiving a Bachelor of Science degree in criminology and criminal justice, said she decided to attend ASU for a couple of reasons, at least.

One was it was different than anything she had experienced, “and I wanted to see more than just New Jersey,” she said.

“Even though I love the beach and wanted to have family close, I felt that for personal growth I needed to immerse myself in independence and figure out what it is like to be successful on my own. Looking back, I’m surprised at how mature my decision actually was and I am thankful for my past self.”

The other reason? It didn’t hurt that her stepfather attended ASU.

“So hearing him talk about football games, campus and the culture of a big school motivated me to go for it.”

Read on to learn more about Swisher’s ASU experiences and how her time her has her making some rather big career plans:

Question: What’s something you learned while at ASU — in the classroom or otherwise — that surprised you, that changed your perspective?

Answer: Something that changed my perspective was when I began teaching ASU 101. It is much different than being a student, because you must be actively aware of your students, especially during their first semester. The transition to higher education is different than anything they have experienced before. As a peer-instructor, I went through a major learning curve. The diversity that each student brought from their past experiences was extremely valuable and it was my responsibility to foster an environment where students were comfortable to share. I have learned so much from my students, not only about them, but about myself as well.

Q: Which professor(s) taught you the most important lesson while at ASU?

A: Doug Wilkey taught me many important lessons during my time at ASU, but the most important was to come into the field of criminal justice – and life in general – with an open mind. I took classes in race, ethnicity and crime as well as in domestic violence with Professor Wilkey. Especially in criminal justice, we tend to correlate offenders with negative characteristics and even put the sole blame on them. If this major taught me anything, it is that everyone in the system has a story – that often does not get told.

The analogy looks like this: The root of a problem is hidden under the soil. If you dig you can see it, but most only take the time to look at the leaves and branches of the tree. We see people going into the system and committing crime, but often do not dig deeper to understand why, or better yet, how we can successfully help them. Applying this to your own life, having an open mind that allows you to see people, without making assumptions, allows for more growth and understanding to happen.

Q: What’s the best piece of advice you’d give to those still in school?

A: The biggest piece of advice I could give someone, as cliché as it sounds, is to take advantage of all the opportunities around you. Even if you do not think that you are qualified for the position or are nervous about joining a new club, it never hurts to try. I think a lot of the time we discount how valuable we are, we all bring something to the table. I got rejected from many different internships and jobs that I applied for, but I used all of the interviews and information learned when another opportunity arose. My motto has always been to be comfortable being uncomfortable. If I stayed within my safety zone of comfort, I probably would not have come across the country to ASU. I think to nicely sum up my advice: Go for it. You learn something from everyone you meet and life tends to be unpredictable.

To back up what I’m saying, I interviewed to be a community assistant my freshman year. During the interview, Amanda Andrew of the Watts College staff, with whom I had the privilege of working, thought that I would be perfect, instead, for being a peer instructor for ASU 101. Although I didn’t get the position I originally went in for, the position I ended up with was absolutely amazing. I’ve been a peer-instructor for the past two years!

Q: Where was your favorite spot to study, meet friends or to just think about life?

A: My favorite spot on campus was either the GLV (Greek Leadership Village) or Songbird Coffee & Tea House in downtown Phoenix. I spent a lot of time in the GLV my freshman year at ASU because it was on the Tempe campus. As a downtown student, I didn’t have any classes in Tempe, so it was like a little escape from school, even though it was still a part of campus. Songbird was my absolute favorite place to study before the pandemic. Especially during my freshman year when I didn’t have a car, it was a quick walk from the dorms. They have picnic tables and bird feeders in the front of the shop so it is a really nice environment. All of their food is made in-house and I made it a goal to try a different type of tea each time I went — prickly pear is my favorite. It’s funny looking back now at how many applications and assignments I turned in at those tables!

Q: What are your plans after graduation?

A: I have been accepted into the 4+1 — technically 3+1 because I am graduating a year early — Master of Science in criminology and criminal justice program at ASU. I started the program this past fall and will be graduating in May 2022 with my master’s degree. I intend on pursuing a thesis but haven’t chosen my research topic yet, although I have a few in mind. There are so many new areas in the field that need a larger literature base and I would love to contribute. After finishing my master’s degree I plan on attending law school, hopefully at Sandra Day O’Connor, at ASU. They have programs where I could take a year of classes in California or Washington, D.C. I would love to relocate again and experience a new environment and new opportunities. I would like to work in the legal system as a prosecutor and then a judge. I’ve realized during this past year that a large interest of mine is constitutional law and human rights violations.

I would love to work for an organization such as the Innocence Project or the American Civil Liberties Union, as well, because I think that I would thrive defending people in the niche cases they deal with. Especially with everything that has happened in the past few years, we need people in the system who are open to change and fighting solely for the interests of those whom the system is meant to serve. My dream job would be to become a United States Supreme Court Justice. I don’t want to sell myself short, so I’m setting big goals because there is no reason that I could not accomplish them if I put the work in.

Q: If someone gave you $40 million to solve one problem on our planet, what would you tackle?

A: I would invest it in the correctional system. Many programs that have proven to be successful suffer because there is a lack of funds. In order for rehabilitation programs to function properly they need to be implemented fully so people are given the proper chance to be successful. The funds could be used to create better educational opportunities leading to more people upon release having completed their GED or other certifications. It could also be used towards mental health, addiction and similar programs that are targeted at truly working to support and work through those issues. I also would use it for the education of guards and prison administration. Training guards in specialized areas will allow for more constructive responses to situations and more positive outcomes. There are obviously thousands of social issues that I could have chosen, but I believe that people who are incarcerated must be humanized and given the chance to reintegrate into society. If people are made to feel important and valued rather than “less than” because they committed a crime, I would make a strong argument that recidivism would decrease.