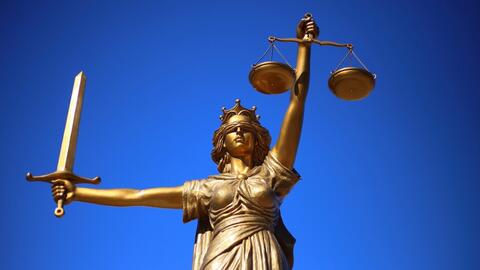 Like everything else, the COVID-19 pandemic has caused upheaval in the criminal justice system, with disruptions in trials and outbreaks among incarcerated people.

A new research paper by an Arizona State University professor uses a new computer simulation software to quantify one of the pandemic’s effects: a greater likelihood that people who are detained before trial will plead guilty in order get out of jail and avoid exposure to COVID-19 — even if they are innocent.

Shi Yan, an assistant professor in the School of Criminology and Criminal Justice, has spent years researching pleas and said that plea deals to get out of jail are not new.

“The pandemic is one additional factor that is making the long-existing problems worse,” said Yan, who also is an affiliated faculty of the Law and Behavioral Science group.

“We found that ‘innocent’ and ‘guilty’ subjects alike had an increased chance of pleading guilty. What was particularly concerning was the increase of false guilty pleas.”

The research paper, “Innocence in the Shadow of COVID-19: Plea Decision Making During a Pandemic,” was published online in June in the Journal of Experimental Psychology: Applied, and it was among the first to use a platform developed at the University of Massachusetts Lowell.

In the study, 704 subjects were recruited online. The simulation platform allowed each participant to first create an avatar before watching an animation showing a simulated crime. The subjects were randomly assigned to be either “guilty” or “innocent” of theft: Their avatar tried on a pair of sunglasses, then either walked out of the store with the sunglasses on top of their head, or remembered to leave the sunglasses on a countertop before exiting the store.

Each subject was offered a plea deal: six months of probation if they pleaded guilty compared with nine months in jail if they went to trial and were convicted. If they pleaded guilty, they could go home in one or two days. If they chose a trial, they would remain in jail to wait for their trial.

Then, half the subjects received additional information: There was a COVID-19 outbreak in the jail. Because of the pandemic, they would likely remain in jail longer than normal if they chose a trial.

Then the subjects had to choose: “Plead guilty” or “Reject the offer.”

Yan and his colleagues found that subjects who were informed about COVID-19 in the jail were more likely to plead guilty — both “innocent” and “guilty” subjects. Moreover, “innocent” subjects rated the COVID-19 information as more influential in their decision than the “guilty” people did.

Question: What did you think of the results?

Answer: Studies done before the pandemic found that for defendants who are detained before trial, the prospect of immediate release, such as a recommended probation or community service sentence, is a strong incentive to plead guilty.

Due to the difficulty of obtaining data in this area, it’s hard to tell exactly how many guilty pleas are made by innocent defendants, but it’s known to be an issue in the criminal justice system.

Q: How is the new experimental platform helpful in studying pleas?

A: Before this study, I primarily analyzed archival court data from state and local agencies for my research, where I look for patterns among real-life plea decisions. The downside is that a lot of key information is missing. There’s no information in agency datasets about how the plea occurred or what the prosecutor offered. We only see the results — the defendant pleaded guilty to this charge and received a sentence of this much, and that’s it.

That’s why I started to get involved with experimental studies, where we don’t necessarily have a real judge or prosecutor, but we can manipulate specific case elements and see how people react. We can focus on one particular variable at a time, and in this case, it was COVID-19 information. And therefore, anything we found would be attributable to the COVID information.

Before this, these kinds of experiments have mostly been text-based. The subject reads a few paragraphs describing a hypothetical scenario.

But the new platform provides animations and virtual environments, which brought it closer to real-life scenarios. Participants are not just reading paragraphs, but watching actors speaking to them. It creates a higher level of authenticity. I’ve been very excited to have this opportunity.

Q: How do you know a study done in a simulation is applicable to real people?

A: This is one of the questions people often ask, and this includes researchers and practitioners in the field as well as the general public. Human decision-making is indeed complicated, but properly designed experiments often found patterns that corroborate with real-life people’s actions.

There’s always an inherent trade-off between internal validity and external validity — that is, the ability for us to tell exactly what is going on versus the ability to fully replicate the effect in real life. To be able to establish a causal relationship, we have to isolate as much as possible into a managed situation and manipulate one or two things at a time.  But in real life, there are all kinds of moving parts and factors driving people’s decisions, and it is never possible to manipulate just one thing while leaving others unchanged. There is an eternal tension between these two.

You may know from a lab setting that A is causing B, but in real life, there is usually a large amount of noise between A and B.

The area of law and psychology has a relatively established way of doing experiments and looking at people's responses to the key variables that the researchers are interested in. While we may not exactly duplicate real life, the findings often largely reflect what people do in real life. For example, numerous studies found experiment subjects would voluntarily plead guilty when they were assigned the innocent condition but face a very harsh potential sentence at trial — sometimes known as the trial penalty. This disparity between trial and plea sentences is also found to be a major driving factor for false guilty pleas in real life.

Chances are in real life we won’t see the exact number of false guilty pleas or the exact effect size of the COVID information we saw in the paper, but we would likely see the general pattern that COVID drove plea rates up. A newly released study found that many actual defense attorneys had clients pleading guilty solely due to the pandemic — and they would not have pled otherwise.

Q: How does this fit in with your other research on pleas?

A: I have been studying pleas since the beginning of graduate school. What I have done primarily is to use actual court data to estimate the distance between the plea and trial sentence. How much would a defendant gain by pleading guilty? Or how much would they lose by going to trial and getting convicted there?

My work has been about how much on average a defendant would gain by pleading guilty. I’ve found that it’s usually about a third to a quarter of the sentence length, but there are huge disparities among individual cases. Secondary data is good for describing and depicting the disparities but not for locating the causes; that is why I am starting to adopt experiments into my research agenda.

Q: Why is it important to study pleas?

A: This is one of the challenges faced by the criminal courts today because pleas have become so prevalent. They account for over 95% of convictions, and even the Supreme Court has acknowledged we now have a “system of pleas.”

There are many legal challenges, including potential constitutional challenges behind pleas.

The Sixth Amendment says that everyone has the right to a jury trial, but if defendants are seeing a huge disparity between a guilty plea offer and what they would get at trial, there can be questions about whether that’s potentially in conflict with what the Bill of Rights has set.

Q: What will you study next?

A: We’re trying to see how different sentences being offered leads to different reactions among defendants. One of the common practices of plea research is to limit the scope to incarceration sentences. So when people are designing the experiments, it’s often, “If you plead guilty it’s six months in jail, but if you go to trial it’s five years in prison.”

But there are many sentences that don’t involve incarceration. There are monetary sanctions, sanctions that require the defendants’ labor, like community service. There are also sentences that restrict things they can do in their life, like license restrictions or interacting with certain people or approaching certain places.

I’m now in the early stages of conducting a study in that direction, on the experiment platform we used for the COVID and plea study.

In the longer term, what I would like to get from these experiments is to look at the deeper structure of people’s decisions, like their emotions or their perceptions and how that relates to their decision to accept or reject an offer. What if certain defendants feel they have a stronger grasp of outcomes than others? Or if some defendants feel that the whole process is fairer than others, will that make a difference in pleas?

I look forward to examining these issues while continuing my studies utilizing archival court data.