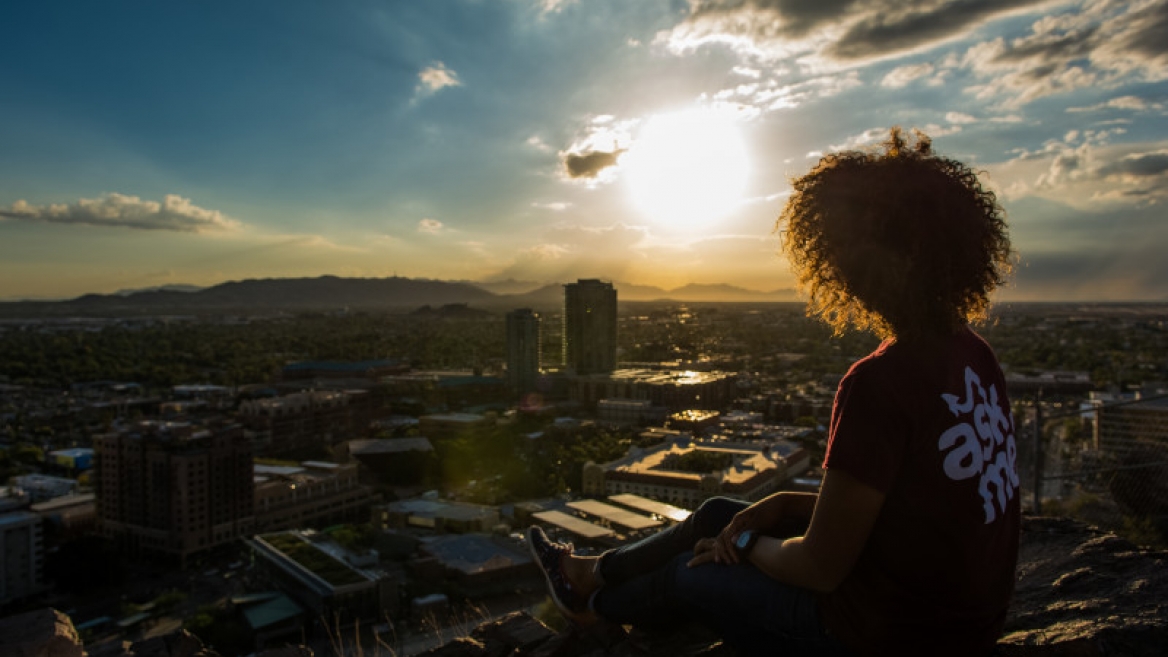 George Floyd, the man whose death in police custody launched a thousand protests in 2020, has reignited a critical conversation about systemic racism and social injustice around the world. In 2021, almost one year after Floyd’s death, change is starting to happen.

From conversation to activation, constitution to evolution, ASU is among the global institutions rising to the challenge of change for the betterment of its community and society as whole. The voices of some determined and persistent members of the community underscored the urgency of this challenge and helped bring a new initiative to life.

In the days and weeks following the death of George Floyd in Minneapolis, advocates and allies of ASU’s Black student community joined the front lines of a global movement —  in the midst of a pandemic —  to speak up and speak out on long-standing inequalities reawakened by Floyd’s death.

ASU President Michael Crow listened. His response: a 25-point action plan to address issues of bias, discrimination and underrepresentation at ASU. Students at the front lines of the movement soon found themselves at the forefront of a new initiative —  the LIFT initiative — and began work on the complex task of implementing the 25 actions alongside experienced members of ASU’s faculty and staff.

As members of the newly formed Advisory Council on African American Affairs (ACAAA), student members have taken part in meetings, created programming and carried full course loads all while answering the call for transformation at ASU.

ACAAA member Kiara Kennedy is a senior studying health sciences in ASU’s College of Health Solutions and a student-athlete on ASU’s softball team. She co-created the group Sun Devils United and the Black Student Athlete Association with other student athletes in response to the mass demonstrations for social justice in 2020. Kennedy says being selected to join the ACAAA and help carry out the actions of the LIFT initiative has been an empowering experience in advocacy and leadership development.

“My hopes for the 25 points are to see these points continually move in the right direction for the future and see a change within ASU,” Kennedy said. “I am truly grateful for this opportunity and so glad I've gotten the chance to work with these wonderful individuals.”

Among the LIFT action items elevated to high priority for student members of the ACAAA is the creation of a multicultural space on ASU’s campus. Cornelius Foxworth II, an ACAAA member and a senior studying psychology, business and criminology is looking forward to seeing the multicultural center come into being.

“Minority students at (predominantly) white institutions often get lost in the crowd or looked at as this token item of diversity and inclusion,” Foxworth said. “If we are going to have minority students at this campus feel comfortable and protected, it’s really important that we have those resources for them.”

The working group leading the efforts on the multicultural center are assessing design options for the proposed space and will be sharing recommendations in the months ahead.

Keeping in step with the LIFT action item to support student organizations and their initiatives on behalf of Black students, Foxworth and other members of the Black African Coalition student organization, for which he serves as vice president, recently unveiled a new guidebook for current and incoming students. The BAC Guidebook is a virtual pamphlet that shares resources and programming available through the 33 member organizations that compose the BAC. In March, the group also launched its first Black Excellence Experience Tour (BEET) for prospective Black students considering ASU as the next stepping stone in their education, and will be hosting another virtual BEET event in late April.

Through the LIFT Initiative, the student members of the advisory council are also putting work into promoting the success and well-being of students of color; helping to create graduate assistantships for underrepresented students; and organizing recruitment fairs for undergraduates of color across all disciplines.

Another high priority for the students of the advisory council is the effort to reimagine and enhance the efforts of the campus police force to meet the overall needs of the ASU community. The effort is a direct response to criticism that has been leveled against policing practices across the nation in the aftermath of the deaths of George Floyd in Minneapolis and many others.

Kennedy says this action item in the LIFT initiative is necessary, especially in the current social climate. She says students need to be assured that campus police are here to protect all students equally regardless of race, and that starts with making sure that police have the right training and tools to do just that.

“This is how students feel personally,” Kennedy said, “and (the police) need to be able to hear how students feel because it’s really us that are keeping the campus going, which is why this initiative is super important.”

The efforts of the ACAAA’s student members have left a big impression on other council members including co-chairs Colleen Jennings-Roggensack and Jeffrey Wilson.

“The passion that the students bring is exciting,” said Jennings-Roggensack, vice president of ASU’s cultural affairs.

Wilson, a senior faculty member in the W. P. Carey School of Business, added that the students are honing their negotiation skills through their work in the council.

Jennings-Roggensack and Wilson both agree that everyone is learning lessons from each other in the process. They say having the students as part of the council has helped fuel the commitment that all the LIFT committee members have for the initiative.

Learn more about the LIFT initiative and the Advisory Council on African American Affairs.