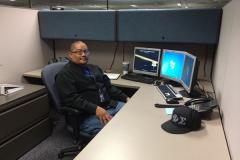 Eye-opening. That’s what you could call Richie Del Rio’s first day on the job at an internship in the Criminal Intelligence Division of the Maricopa County Sheriff’s Office. It was eye-opening, not for Del Rio, but for his supervisors.  They were amazed at how fast the ASU School of Criminology and Criminal Justice student helped nab a suspect. It all started with a call from a patrol officer who was out of leads on a burglary investigation.

“This officer had already tried what he could to find the suspect,” says Sergeant Jon Halverson of the  Criminal Intelligence Division’s Counter-Terrorism Unit. “And I believe he had a name and date of birth. He reached out to us. I went and gave it to Richie to see what he could do.”

Del Rio was already busy trying to track down a suspect in a several years-old sex crimes case. The suspect had recently reentered the country. He put that case aside and began working on the burglary case. He took what information he found and created what’s called a “workup” that made its way to the officer in the field.  Del Rio went back to work on the rape case.

Del Rio is not your typical intern. Or college student. The 39-year old was a field service engineer and technician repairing semiconductor manufacturing equipment. In the aftermath of the Great Recession, he was laid off. He saw it as an opportunity to go back to school and combine his problem solving skills with police work. His dad was a cop in the Philippines. His uncle was a member of that country’s Secret Service. Del Rio didn’t want to be a police officer. He wanted to be an intelligence analyst. His first day as an intern confirmed he made the right decision.

“At the time I was excited, it was the kind of feeling I knew I would eventually feel doing this job because, for me, being an officer on the street wasn't really my thing,” Del Rio says. “But, I knew that as soon as I learn about intelligence analysis this was going to be my niche.”

It’s a growing and important niche in law enforcement. Once the domain of agencies involved in national security, intelligence analysis is now a part of federal, state and local and law enforcement agencies. Since 9/11, those agencies are sharing information at unprecedented levels.

Del Rio works in a cubicle in the Arizona Counter Terrorism Information Center (ACTIC) located in a nondescript office building off I-17 in north Phoenix. Local, state and federal law enforcement agencies work with counterparts in fire, emergency management, public health and other government agencies. More than 140 agencies are represented at the ACTIC.

“We like to look at it as all-hazards,” says John Bailey, a lieutenant in the Homeland Security Division of the Maricopa County Sheriff’s Office. “A big part of the reason the ACTIC was put together was to prevent major issues. That all-hazard component includes public health, it includes fire, it includes law enforcement, it includes all the different parts of governments that we sometimes don't really think about, the traffic control folks--resources that you can get from the Department of Emergency Management.”

A key part of the system is an information sharing platform called COPLINK AZ. Originally developed by researchers at the University of Arizona Artificial Intelligence Lab, the system allows information sharing and analysis across jurisdictions.  Sgt. Halverson, a former homicide detective, provides an example of the kind of difference COPLINK AZ makes.

“Traditionally you do all that you can and if you can't locate your suspect the case might go inactive,” says Halverson. “But with the integration of intelligence, specifically through COPLINK, we could say ‘this suspect was previously arrested by Pinal County.’ So now, as a detective on the street in my vehicle, I could pull up Pinal County’s booking records and see who the suspect listed as the next of kin or emergency contact. So now, I can take that and have our guys go there or use it as an additional lead. So what intelligence gives us is the ability to go farther, much more efficiently, and all of that serves the public better.”

But in order to do that, the law enforcement community needs skilled intelligence analysts. Lt. Bailey says his agency recently interviewed five candidates for a crime analyst position. None knew anything about COPLINK.

That’s why the crime intelligence internship program with the ASU School of Criminology and Criminal Justice is so important. It helps develop the next generation of intelligence analysts. Each semester, the Crime Intelligence Division of the Maricopa County Sheriff’s Office recruits the best and brightest the program has to offer. It requires a minimum GPA of 3.5. Analytical skills are a must, as are computer skills-- especially with social media. Students must also pass an extensive background investigation. If selected, they are required to work eight-hour shifts two to five times a week.

"I'm looking for someone who does not take ‘no’ for an answer,” says Sgt. Halverson. “Someone who does not say 'I've gone as far as I can and now I'm done.’ I'm looking for someone who will dig and be creative. And this is an attribute that I never thought would be in law enforcement--but it really is now--I need somebody who is friendly and gregarious who can go out to other analysts and other sources of information and build relationships of trust and friendship. Because the days of crime being one jurisdiction’s issue are over.”

The internship offers the chance to get in the field and work on real time crime scenes with the goal of understanding the pressures officers face on the front line.

“I want to emphasize that this program is unlike any program that I know of, especially it’s unlike any program in this state,” Halverson says. “We're teaching these ASU interns how to actually do the job. We're giving them a skill set that is second to none. And a skill set that was previously unobtainable unless you were a sworn law-enforcement officer or a criminal researcher or analyst.”

The Sheriff’s Office is looking for three or four interns for the spring 2015 semester. Del Rio graduates in December and hopes to land a position as an intelligence analyst. Sgt. Halverson believes the internship program will help tremendously.